You are here: Home » Light matter interaction at low dimension

In our work we have shown that high quality tunable optoelectronic response can be obtained when few layers thick optically active van der Waals material (MoS2) is attached to a highly conducting but optically inactive (zero bandgap) monolayer van der Waals material (graphene) to form a heterostructure. Photoresponsivity of such heterostructure is extremely high and is not commonly seen in conventional photo-sensitive materials/devices. An electrostatic tunable photoresponse in such hybrid devices is obtained by controlling the carrier density of graphene-MoS2 structure in a field effect transistor (FET) configuration. It is also seen that, because of the electrostatic controllable charge trapping mechanism, re-writable optoelectronic memory operation can be accomplished with these devices by using a sequence of light and gate pulses (Nature Nanotechnology 8, 826-830 (2013)).

Through our recent investigation we have shown that a novel design of a van der Waals heterostructure can be utilized to count photon in an optical pulse with single photon resolution. The main constituent elements of the structure are the bilayer graphene (BLG) and few layers MoS2. In a dual gated structure, a combination of graphene-boron nitride layers is used on top of BLG-MoS2 structure to constitute the top gate. Bilayer graphene allows opening of a bandgap under the influence of vertical electric fields appearing from top and bottom gate potentials. Presence of bandgap in the conduction channel allow low dark current and large transconductance, thus helps attaining extremely low noise equivalent power (NEP) while attaining high photoresponsivity. Previously reported graphene-MoS2 planer-photodetectors suffer from high dark current (~0.5 mA) which also limits the device performance by introducing electrical noise. Low dark count rate (~ 0.07 Hz) and large detection dynamic range (~ 40 dB) are the characteristic features of these BLG-MoS2 based photon counting devices (Advanced Materials, In press (October-2017)).

We have also investigated light matter interaction in graphene by utilizing plasmonic structures. A monolayer graphene is used as a spacer layer between nanostructured-dimers which cause humongous near field enhancement under optical illumination. Due to strong coupling of light to graphene, a photoresponsivity of ~3 A W-1 is obtained. Such response is almost two orders of magnitude larger than the other graphene based photodetectors where plasmonic structures were used to couple light. (This project was completed in collaboration with Paria et. al., Advanced Materials 27, 1751-1758 (2015))

We are currently investigating nature of photoconductivity of the heterostructure composed of ultra-thin semiconducting Tellurium (Te) nanowires (NWs) with single layer graphene. Te NW, being a narrow band-gap semiconductor (~0.6 eV), serves as an excellent potential candidate for near infra-red (NIR) detector. The preliminary transport results of the Te NWs show that the electrical transport in the NWs is thermally activated in high temperature (>170K) and in the low temperature (<170K), Mott Variable Range Hopping (VRH) takes place. The optical response study reveals that the bare Te NW also acts as NIR detector (920nm – 1720nm) as expected, but the sensitivity of such detection is very low, which is measured by a quantity, called photoresponsivity (γ). In bare Te NW, we have got γ ~ 10-4 – 10-2 AW^-1 at 180K. But sandwiching the NWs with a single layer graphene enhances the sensitivity of the heterostructure by several orders of magnitude, thereby giving γ ~ 106 AW-1. This happens because of high carrier mobility and long carrier lifetime in graphene. Such high photoresponsivity also corresponds to a high specific detectivity (D*), which in our case is ~ 1013 Jones (almost of the same order of magnitude of the highest D* in NIR regime reported so far). Further detailed experiments are going on in order to look into the physics and time scales of the charge carrier transfer from Te NW to graphene on the application of NIR photons. 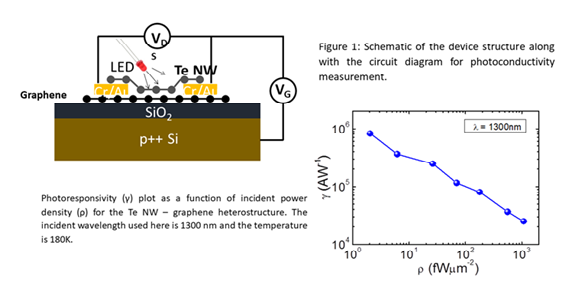