You are here: Home » Archive

Engineering of conduction and valence band in semiconductors can make charges move only along flat plane. These are called two-dimensional (2D) electron electron systems, and routinely achieved in various systems such as the Silicon-MOSFET or GaAs/AlGaAs heterostructures. The 2D electrons also act as an excellent platform to verify many fundamental theorems of quantum physics, at the same time discovering some new ones. Our work in such systems aim to investigate the effects of Coulomb interaction on the charge and spin transport in such low-dimensional systems at ultra-low temperatures that has been predicted to result in several exotic quantum states of charge.

Si:P and Ge:P δ-layers are a new class of two-dimensional electron system, where electron transport occurs in an impurity band that is intrinsically half-filled. This is because these systems are formed by sandwiching an atomically thin electrically conducting layer of P atoms in Si or Ge matrix, where each P atom contributes exactly one electron to the impurity band.

From the application perspective, continued investment in Si and Ge based devices reflects its deep rooted impact on the present day electronics. In this respect, our investigation reveals extremely low noise in Si:P δ-layers, one of the lowest values ever reported for doped semiconductors. Phosphorous doped Si systems being one of the standard materials for the semiconductor industry, the observation of ultra-low noise characteristics is extremely important and desirable.

Additionally, these devices offer the possibility of investigating the novel and exotic phenomena that arises when the Fermi lies at or close to the centre of the band. Bulk crystals of Si doped with P has been one of the classic systems to emulate the Hubbard model.  Being confined to two dimensions, localization and quantum interference are inherent to these devices at low temperatures. Instigation of these provides valuable information about the nature of transport in the system. The devices exhibit weak localization and universal conductance fluctuations (UCF), but there exists an anomalous suppression of UCF for devices with low doping densities.

Ever since the first two-dimensional electron systems (2DES) were realized, they have been used extensively to investigate various theories and concepts of charge localization. The scaling theory of localization prohibits extended electronic states in two dimensions (2D) at absolute zero in presence of disorder. While there has been extensive theoretical work on the possibility of a delocalization caused by electron-electron interactions, conclusive experimental evidence of such an effect has not been observed. On the contrary, the insulating phase in 2D at low temperatures has proven robust, in particular in the case of strong localization, where the resistivity is much larger than h/e2.

For strong disorder, insulating variable-range hopping transport has been observed, with interaction effects only leading to a modification of the single-particle density of states. In low but finite disorder an interaction driven localization mechanism has been suggested in form of pinned charge-density waves. However, no deviation from the insulating nature of transport has been reported in potential realizations of such phases, nor is it expected theoretically. The intermediate regime where disorder and interaction effects are equally important, is very challenging to study theoretically and experimentally and is still not well understood. Our work represents an attempt to close this gap.

We have observed direct experimental evidence that the insulating phase of a disordered, yet strongly interacting two-dimensional electron system (2DES) becomes unstable at low temperatures. As the temperature decreases, a transition from insulating to metal-like transport behavior is observed, which persists even when the resistivity of the system greatly exceeds the quantum of resistivity h/e2. The results have been achieved by measuring transport on a mesoscopic length-scale while systematically varying the strength of disorder.

The Coulomb interaction in a quantum degenerate system, expressed by the ratio rS of the inter-particle Coulomb repulsion energy to the Fermi energy, determines the ground state and elementary excitations when rS >> 1. In 2D, possibility of various forms of charge density wave ground states, including Wigner crystalline, striped or bubble phases, has attracted significant theoretical and experimental attention, even though a convincing detection of such phases with conventional transport experiments remains inconclusive. Our research is directed in investigating these possibilities as well.

Spin-excitations and Magnetic Influence on Electrical Transport in Semiconductor Nanostructures 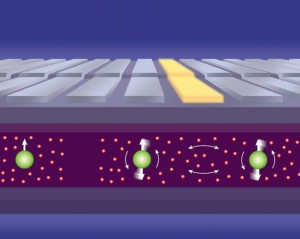 Nowadays, nanostructures such as quantum dots (a tiny puddle of charge) and quantum wires (appears when the puddle is pulled to form a one-dimensional line of charge) can be created with nano-fabrication processes on band-engineered semiconductor heterostructures. These nanostructures are extremely interesting systems, where various intricate aspects of quantum mechanics, such as quantum entanglement, fractional excitations ( Tomonaga-Luttinger liquid) etc. can be investigated in a controllable manner. This has also seen semiconductor quantum dots being proposed as a quantum bit, or “qubit”, in the next generation quantum computation and information technology. Our work is directed toward detection and measurement of quantum entanglement in quantum dot nanostructures that form the very basis of quantum information processing.

The exchange energy component of Coulomb interaction leads to a number fascinating effects involving the electron spin in nanostructures. The ferro TEM micrograph of the ultrathin nanowires showing them to be ~2nm in diameter. (Right) A four-probe nanowire device, with electrical contacts made via a modified device fabrication route.

Above: The normalised linear response resistance (R) as a function of temperature for four ultra-thin gold nanowire bunches with different number of wires is shown. In all cases R increases with decreasing T in a power law such that R ∝ T−a, which means that that a gold nanorire become insulating when its diameter is reduced to nanomenter scales.

We have investigated the electrical transport on molecular scale single crystalline wires of gold, with diameter of about 2nm (see above), which forms the thinnest freestanding noble metal wire ever measured. The wires are grown via a wet chemical route based on oriented attachment process, by Prof. N. Ravishankar’s group (http://mrc.iisc.ernet.in/~nravi/) at the Materials Research Center in IISc.

Our most striking finding is an insulating behavior in these wires, and emergence of a gap in the density of states, either of which are not expected in a simple transition metal system, such as gold. Our analysis provides very strong evidence for strong electron correlations and the emergence of collective behaviour that bear evidence of the Tomonaga-Luttinger Liquid state, in a metallic system. The linear response electrical resistance exhibits a power-law dependence on temperature (see above). In addition, the variation of current over a wide range of temperature and voltage obeys a universal scaling relation that provides compelling evidence for a non-Fermi liquid behaviour. The study demonstrates that the quantum ground state at the nanoscale can be radically different from the bulk, even in a simple metal. (For Reference, see Chandni et al. ACS Nano 2011, Chandni et al. Advanced Materials 2013)

Shape-memory alloys are so-called smart systems which “remember” their shape even under significant deformations, and revert back to the original shape upon heating.

These are extremely important system in many technologies –  microactuators for microvalves and micropositioners, microvalves, space technology, and so on.

There several aspects of these systems are extremely interesting from fundamental physics view point as well, for example, they represent a class of system that display…

Noise away from Equillibrium

When subjected to external force, physical properties in many complex natural systems respond in bursts that follow very similar laws. This universality is manifestation of a critical state which governs many phenomena, from avalanche of atomic species causing propagation of fracture, to jerky movements of continental plates during earthquakes, or even stock market fluctuations. In solid sate physics, systems that display avalanches are often far from thermal equilibrium, and evolve through bursts when an external force is applied. Ever since Bak-Tang-Wiesenfeld proposed their seminal theory of self-organized criticality in 1987, phase transitions in driven non-equilibrium systems have been scrutinized repeatedly. The central uncertainty in this field, which has now survived more than two decades, concerns whether these systems self-adjust to the critical state irrespective of the driving field, or if the self-similarity occurs only at a critical driving force, or often called a “global instability”.  The binary shape-memory alloys, such as Nickel-Titanium, form an ideal playground for an experimentalist to find an answer to this question.

Our work in this field has two directions:

Sensing with Micro- and Nano-ElectroMechanical Systems (MEMS and NEMS)

Follow this link to the view the picture gallery.