You are here: Home » Research » Graphene, TMDC’s and Topological insulators

Ultraclean graphene heterostructures offer the exciting possibility to probe the unique, intrinsic electronic transport properties of the Dirac carriers. However, processes at the metal-graphene junction often dominate the transport characteristics. We have shown that the low-frequency noise contribution from the contacts dominates the measured device noise. [Nat. Commun. 7, 13703] The understanding of the microscopic mechanism of noise at the metal-graphene junction allows us to tailor the nature of noise from the contacts.

We have also studied the interaction of a single Coulomb impurity, present in the proximity of a contact, with the charge carriers in high mobility graphene. Such interaction can significantly affect the transport in high-mobility heterostructures and manifests as random switching events in the measured conductance with a large magnitude ~e2/h. This switching is very sensitive to the local density of states and was exploited for Landau level spectroscopy. [Phys. Rev. Lett. 113, 026601 (2014)].

With the understanding of the effects of the metal-graphene junction and how to avoid them, we are studying the physics of conductance fluctuations in bilayer graphene in the strongly localized regime. 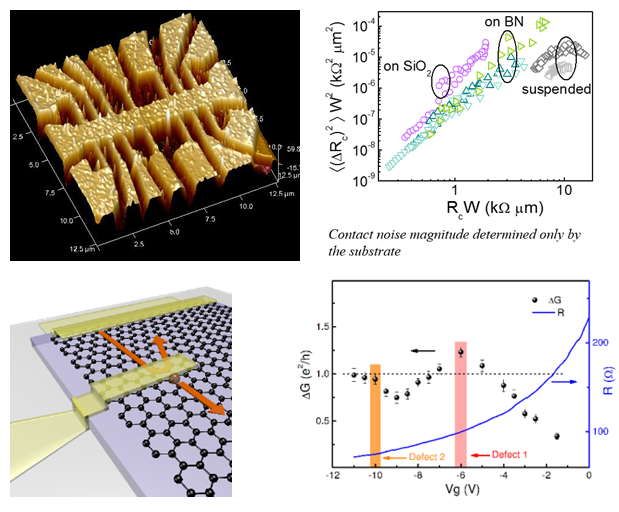 We have employed detailed conductance statistics as a tool to probe the nature of transport in strongly gapped bilayer graphene. We find a marginal self-averaging nature of the logarithm of conductance, which is a strictly one-dimensional phenomena. This indicates that the transport takes place via robust edge modes in strongly gapped bilayer graphene. The possibility of topological nature of transport at the edge in bilayer graphene and the presence of strong interaction at the edge suggest a new localization mechanism and open the possibilities of studying novel fundamental physics.

In the strongly correlated systems, perovskite oxide family exhibits a variety of functionalities, since the perovskite structure allows a wide range of materials with diverse physical and chemical properties. One of such perovskite oxide is SrTiO3(STO) which displays exotic functionalities such as room temperature ferroelectricity, polar nanoareas as well as two dimensional electron gas on the surface which have attracted immense interest to exploit the surface of STO. Although, inadequate technology has raised the challenge to the thorough investigation of the STO surface, the recent developments of hybrid devices have opened up new techniques to explore the surface. We have employed dual gated single layer graphene field-effect transistor as a probe to study the surface of STO. We experimentally provided the evidence of electric field tunable dipolar clusters at the graphene-STO interface. The effect of dipolar clusters of the STO surface on the average resistance of graphene was masked by the trapped charges at the interface of graphene and STO introducing hysteresis in the transfer characteristics, whereas the low frequency 1/f noise exhibited a bistable characteristic which was attributed to the behavior of interfacial dipoles at different electric fields.

Recently two-dimensional Van der Waals materials such as graphene, Molybdenum disulphide (MoS2) have been studied extensively for its potential applications in flexible electronics. The high carrier mobility in graphene increases the speed in graphene-transistor, but the absence of bandgap in graphene decreases the current on-off ratio. On the other hand, although MoS2 has a higher bandgap increasing the current on-off ratio of MoS2-transistor, it limits its application due to very low carrier mobility. To increase the efficiency of transistors, graphene, MoS2 and other 2D materials based heterostructure of different geometries are being explored. In graphene-MoS2 hybrid structures, the Schottky barrier height of graphene-MoS2 junction can be tuned by 0.4eV by modulating the Fermi level of graphene by applying back gate voltage. Single layer graphene (SLG)/MoS2/multilayer graphene (MLG) heterostructure exhibits very high on-off ratios along with high mobilities ≈800cm2/V.s at room temperature due to the tunability of graphene-MoS2 Schottky barrier.

Hybrids, made by stacking different Van der Waal’s materials, has led to enhanced device functionality, for example, high mobility graphene when coupled to an optically active material like MoS2, has demonstrated the highest photoresponse ever reported.  The photo detection capabilities of graphene-MoS2 can be increased further by reducing the background noise which gives the detection limit in these devices. Heterostructures involving different vdW materials can be utilized to improve the signal to noise ratio and enhance the sensitivity of these devices.

Nature of electronic states in TMDCs:

Semiconducting transition metal dichalcogenides (TMDCs) are an emerging family of two dimensional Van der Waal gapped materials which show immense potential as precursor for fantastic field-effect transistors (FETs) with near ideal subthreshold slope, better gate coupling, and low power consumption when compared to current silicon technologies. In this respect, we are working towards fabricating extremely high quality FETs  with large ON-OFF ratio , high carrier mobility and low subthreshold slope using innovative vertical stacking (2D heterostructures) of TMDCs (mainly MoS2 (molybdenum disulphide) ) and other two dimensional materials like graphene, and BN. As an initial investigation, we have used low frequency noise measurements to model the ON-OFF transition in ultrathin nanometer scale WSe2 (Tungsten diselenide) and MoS2 FETs. We find clear evidence of percolative switching in all TMDC devices coupled with a peak in noise magnitude at the transition voltage attributed to the inhomogeneity of the channel during the switching process.1 A proper understanding of the microscopic channel configuration during switching is a vital step towards improving device parameters viz. subthreshold slope, carrier mobility etc. 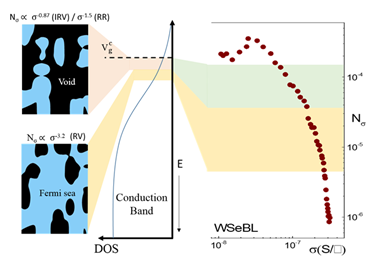 The large scale fabrication of 2D materials for commercial uses demands a cost-effective, scalable and reproducible way to grow large-area, uniform, layer-controlled sheets. To achieve this end, chemical vapour deposition (CVD)1,2 has emerged as the go-to method but it is not without its drawbacks. Not only do films of graphene and transition mental dichalcogenides (TMDCs) such as MoS2, MoSe2, WS2 etc grown on metal and insulating substrates exhibit a higher defect density but by sheer nature of their growth via nucleation at various nucleation sites, they tend to be polycrystalline and comprised of grain boundaries (GBs) at the junction where adjacent grains meet. The polycrystalline nature leads to poor structural and electrical characteristics but efforts have been made towards overcoming it. In MoS2, these GBs modify the electrical transport in the parent material by giving rise to higher electrical noise which arises from trapping-detrapping processes between the conduction band and the localised defect states. The GBs in TMDCs have also been theoretically predicted to host ferromagnetism4 making them 1D ferromagnetic spin chains. It will be interesting to probe and quantify the magnetic field strength arising out of these GBs and suggest potential applications for their use in spintronics. 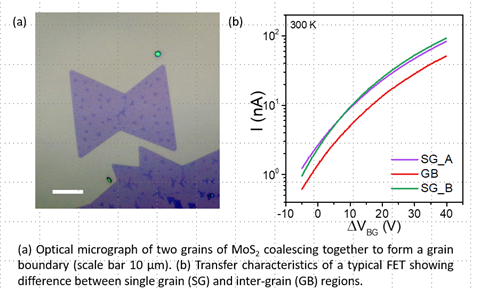 Topological insulators (TIs) are characterized by gap-less linearly dispersive spin-polarized surface states in the bulk band-gap. These materials are promising candidates for various electronic and spintronic applications due to the topological protection of surface states against backs-cattering from non-magnetic impurities. However, the sensitivity of these surface states to different types of disorder is still a matter of active debate. Noise measurements in exfoliated TI devices from bulk crystals have revealed that in the thickness range of 50 nm to 80 m charge number fluctuations in the bulk can give rise to the resistance fluctuations in the surface states. We have also seen that in MBE grown magnetically doped Crx(Bi,Sb)2xTe3   thin films, the noise originates from transport in the localized band tail of the bulk valence band. Our studies reveal that even in undoped MBE grown large area (Bi,Sb)2Te3 films with thickness as low as 10 nm, the internal bulk defects are the dominant source of noise. 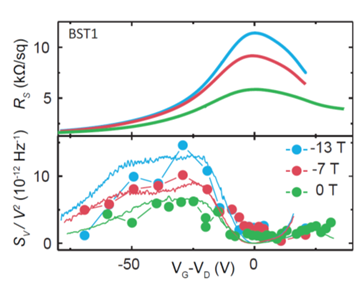